The Royal Warwickshire Regiment was one of the largest infantry regiments in the Second World War. All eleven of its battalions served in Europe, The Middle East, India, The Far East, and on home defence in the UK.

‘The Warwicks’, as the members of the RWR were known, played significant roles in North West Europe. In 1939 the 2nd, 1/7th and 8th Battalions were part of the British Expeditionary Force (BEF) in France and Belgium, despatched there as German forces invaded. Like other units, they had to fight their way back to the beaches of Dunkirk in the face of the German Blitzkrieg. 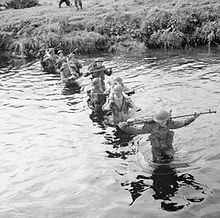 The 2nd Battalion was given the task of keeping open the main supply route to Dunkirk. They were holding back the enemy at the town of Wormhoudt. By the end of May 1940 there were fears they would be cut off. The nearby hamlet of Esquelbecq was a German stronghold with three battalions of the SS, (Adolf Hitler Regiment). The SS attacked and after 8 hours had overrun the British position.

About 70 men from the Royal Artillery, the 2nd Warwickshire and 4th Cheshire Regiments were herded into a milking shed. The SS Leibstandarte threw in grenades and opened fire with machine guns, killing more than half those inside. The survivors were taken prisoner a few days later by the regular German army. Those responsible for the massacre were never brought to trial.

Holding back the enemy near Dunkirk 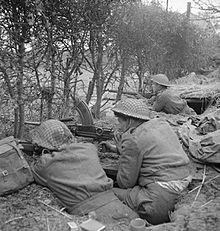 At the same time, the 1/7th and 8th RWR Battalions were in Belgium, and with the allies in retreat, were sent to defend the Ypres-Comines canal zone as the Germans threatened to cut off the BEF. The lives of many thousands rested on this depleted force. The troops withstood the assault of three German Divisions on 27th and 28th May. This contributed significantly to the successful withdrawal of the BEF and the number of men who reached England safely –  25,000 on 28th and 47,300 on 29th. But the loss of life among the three battalions was great. On their return to England their combined strength was less than 700 (about one battalion). After Dunkirk, the 2nd Battalion was moved to Somerset to counter possible German invasion.

In 1944 the Warwicks were in the forefront of the invasion of mainland Europe. The 2nd Battalion landed on Queen Beach, a subdivision of Sword Beach, on 6th June 1944. The 1/7th Battalion joined them three weeks later and took part in the fierce fighting around Caen. They captured the village of St. Contest, fighting against the elite SS Panzer Grenadiers. But they had lost 26 men with 96 wounded. By the end of August the Germans were in retreat. The 2nd Battalion moved to Holland and helped with the eastward advance as the allies crossed the Rhine in ‘Operation Market Garden’. Between D-Day and the end of the war, the 2nd Battalion of the RWR lost 286 officers and men killed in action, and more than 1,000 were missing, wounded or suffering from exhaustion.

In the summer of 1942 the British Army had been driven back to the last defences before Cairo by the German forces under Field Marshal Rommel. British morale was low after fighting a series of retreats across the Libyan desert. A relatively unknown Lieutenant General from the Royal Warwickshire Regiment, Bernard Montgomery, arrived to take charge of the thousands of men in the British Eighth Army.

He exuded confidence and ‘Monty’ assured the men they would beat Rommel’s forces. At the battle of El Alamein, 30,000 prisoners of war were taken and Rommel’s army was eventually driven back to Tunisia.

Montgomery then led the Eighth Army’s landings in Italy, and in 1944 he returned to North-West Europe to take command of the 21st Army Group that had landed in Normandy. 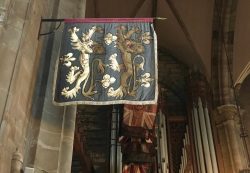 Alongside Patten and other American generals, Monty led the push towards Berlin.

On 4th May 1945, it was Field Marshal Montgomery who took the unconditional surrender of the German forces in North-West Europe, amounting to more than a million men. Montgomery’s personal banner with two golden lions can be seen in St. Mary’s Church outside the RWR Chapel.

During the War, the 1st Battalion was mostly stationed in India. At the outbreak of war they were near the Afghan Frontier keeping supply roads open. In April 1945 they were sent to join allied troops in Burma, and the battalion took part in the capture of Rangoon. After the dropping of the atomic bombs in Japan, they returned to India. 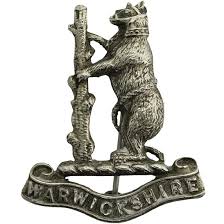 The Warwickshire Yeomanry was a volunteer Cavalry Regiment raised in 1794 to defend the United Kingdom against invasion by the French in the Napoleonic Wars. Two Squadrons of the Regiment volunteered for service during the Boer War 1900-02 as Imperial Yeomanry. In 1908 the Territorial and Reserve Forces Act came into being and the Regiment formed part of the 1st South Midland Mounted Brigade with headquarters in 12 Northgate Street, Warwick.

The Warwickshire Yeomanry served with distinction during WW1 in Egypt as Cavalry from April 1915, and at Gallipoli as Infantry in August 1915, returning to the Cavalry role in Egypt and Palestine from January 1916. In May 1918 the Regiment served as Machine Gunners on the Western Front; many did not return home until they were demobilised in 1919. In 1920 the Warwickshire Yeomanry resumed its Cavalry role.

The regiment was mobilised in September 1939 after war was declared, and in January 1940 was attached to the 1st Cavalry Division in Palestine.

In March 1941 the Regiment lost its horses and was converted to Motorised Infantry, seeing service in Iraq and Syria. In October 1941 the Regiment moved back to Palestine and was ordered to convert to a Tank Regiment.

The Regiment fought with distinction during the Battle of El Alamein in October 1942 and again during the second Battle of Alamein on 2nd November 1942 as part of the 9th Armoured Brigade when the they lost nearly all their tanks.

The next 15 months was spent refitting and training in Egypt and Palestine before the Regiment was ordered in May 1944 to join the Italian Campaign where is saw considerable action as part of the 9th Armoured Brigade. In October 1944 it returned home to Livermere as a Tank Training Regiment.

The Warwickshire Yeomanry are commemorated in a splendid museum in the basement of the Court House/Town Hall in Jury Street, Warwick. It is open at weekends during the tourist season and group tours can be arranged at other times. www.warwickshire-yeomanry-museum.co.uk