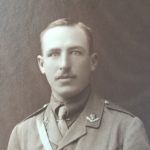 
Wilfred James Moon was born at Budbrooke Barracks, Warwick and baptised at St Mary’s Church on 17th December 1889.  His father, William was a Quartermaster Sergeant with the Royal Warwickshire Regiment.

Wilfred’s mother, Mary, was William’s second wife as his first wife, Emma, had died in 1888.  Wilfred’s half siblings from that first marriage were Frederick Charles, Victoria, Ada, John (known as Charlie/Charley) and Eva.  Wilfred was followed by a sister, Lillian.

His father, William, died in 1900 and the 1901 census shows that Mary is now head of the household and described as a ‘grocer.’ Living with her are two of her step daughters, Ada and Eva, as well as Wilfred and Lilly.  The family were living at 26 Friars Street.

Here is an excerpt from Sgt Webb’s diary, which appears in “Time to Remember – the journal of Lance Sergeant William Webb of the 2nd Battalion, Royal Warwickshire Regiment” by Gerald W Buxton and published by Helion Books (pages 107-108)

…’I have just had a letter from Edith and she tells me that Wilfred Moon was killed, so I went along the trench to tell his brother.  When I saw him he was cheerful and appeared not to know anything about it, so I decided not to tell him now.  The snipers are very busy’ …

‘I had a splendid sleep and awoke to a very quiet day although our artillery was very active.  Charley Moon had a letter today, to tell him of his brother’s death so I went to talk with him for a couple of hours.  I felt so sorry for him, he was so fond of his brother and when he saw me he started crying, poor chap’……

Here is a transcription of the letter:

Dear Mrs Moon
You have possibly been informed ere this of your son’s death and I feel it my duty as his Company & brother officer to express my deepest sympathy with you in your great loss.
Your son was a splendid fellow & devoted to his work & in him I had one of the best & most competent of officers. He was extremely popular with all men & officers and his death will, I am sure, be felt throughout the Battalion.
It was on the night of the 18th about 11.45 p.m. that he was killed while out on patrol work in front of the trenches. He was immediately brought in & I can assure you that everything possible was done for him. He was living but unconscious when brought in & the poor fellow expired a few minutes afterwards.
It was a glorious & noble death Mrs Moon and his King & Country may well be proud of him.
Trust in God will be with you & comfort you in your great trouble.
I remain
Yours very sincerely
Hector C Ellis. Captain
C Company
3rd Worcs Regiment

Two years after Wilfred’s death, his half brother Charlie posted this notice in the Warwick Advertiser

Frederick Charles (known as Fred), his elder half brother, is also commemorated on Warwick War Memorial.  We also found the following plaque, dedicated to Wilfred in St Nicholas Park, Warwick

Wilfred previously served with the Royal Warwickshire Regiment but was transferred to the Worcestershire Regiment just prior to his promotion: