He married Bertha Rose Bastock at All Saints’ Church, Emscote, on 26th December 1908.  Their son George Arbury Newey was born in 1910, by which time Charles and Bertha were living in Acocks Green. On the 1911 census Charles William is referred to as a bootmaker.

Following his death, there is a record in Soldiers Effects to say his widow Bertha received £29-19-2d in pay owed and War Gratuity. 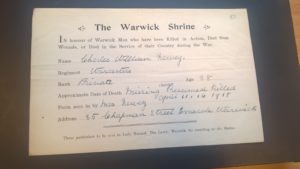 ‘Served in France, reported missing 17th April 1918. Presumed to be killed as no further news was recd.’