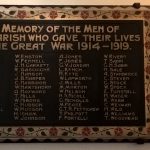 
Arthur Henry Standbridge (known as Jack) was born in late 1897 and baptised at All Saints Church on 11th December 1897.

His father was also called Arthur and his mother Elizabeth (nee Smith).  The family were living at 7 Sanders Street, Emscote in 1901.  Arthur had a younger brother, William Thomas, who was six months old and another brother, Sidney Charles, was born in 1905.

Arthur senior died in the same year (1905) and is buried in Warwick Cemetery.

By 1911, Elizabeth had married John William Griffin and the family were living at 29 Sanders Street.  John and Elizabeth had a son, John Frederick Griffin, born in the Autumn of 1910.  Arthur (Jack) and his two brothers are described as stepsons and Jack is working as a Packer at the ‘plate works’.

The second of these Warwick Advertiser pieces mentions a sister, Marjorie – who would have been born between 1912 and 1917. 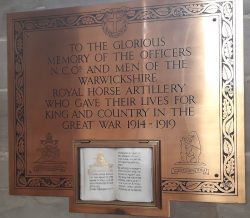 Jack is commemorated along with his colleagues in St Mary’s Church, Warwick.